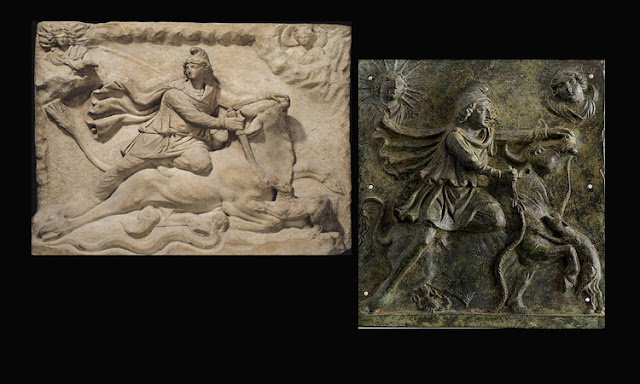 Persia evolved ancient religions such as Mithraism and Zoroastrianism. Upto 6th century BCE, Mithraism was popular in ancient Persia. The main deity of this religion was Mithra, who was a solar deity and regarded as the great god. Sometime around 6th century BCE, Zoroastrianism began to take shape in Persia. It had Ahura Mazda as the main deity and it had the conceptualisation of a great warrior goddess called Mehr or Anahita.

Mehr/Anahita rode a lion and killed a buffalo demon. She is often depicted with the lion and buffalo. She granted victory in war and was worshipped to gain worldly prosperity. Her festival Mehrgan was observed for 10 days around the winter solstice, exactly when Judaism observes Rosh Hoshanna and Yom Kippur. The two festive periods overlap.

Her iconography usually shows her as associated with lion and buffalo.

It is difficult to say if Mehr of Persia was older than Al-Lat of Arabia, or vice versa, or if there was any exchanges of ideas between the conceptualisation of the two goddesses of relatively neighbouring regions. Persia did conquer parts of the Fertile Crescent around 500 BCE and this region came under Zoroastrian influence as a consequence of the expansion of the Achaemenid Empire. It;s quite possible that the worship of Al-Lat arose in Arabia as a result of its contact with Mehr/Anahita, or vice versa. It is also possible that the two developments were independent and completely co-incidental.

More on the warrior goddess in the next post.