Arts and Cultures - Chandra the Moon God in Hinduism 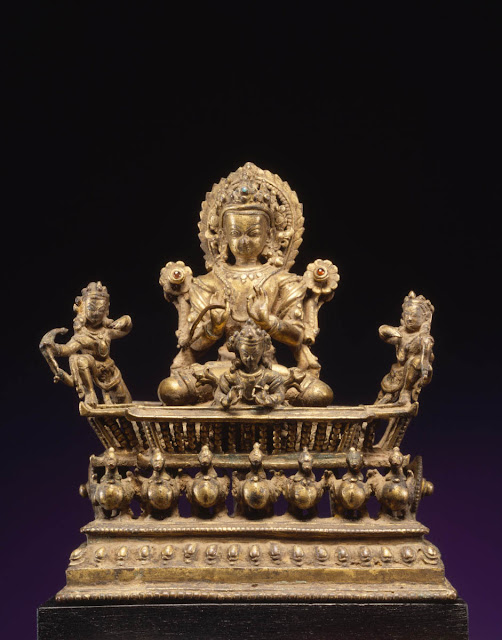 Moon is a highly revered deity in Hinduism, although it's not one of the most powerful divinities. Its importance lies in the fact that Hinduism has both solar and lunar calendars and the dates of many festivals are set by the lunar dates and the phases of the moon. Many Hindu festivals are tied to the agrarian seasonal cycle, which are set by the lunar dates. Thus, Moon is associated with the time cycle and the agriculture.

Moon is regarded as a masculine deity, who married 27 constellations in the sky which are visible with the naked eye and have been known from the earliest times in history. Moon rides a chariot pulled by 7 geese and is flanked by two woman guardians.

Moon is regarded as a soothing deity in contrast to the Sun, which has a harsh sunlight in India. Although sunlight is regarded as essential for life forms, harshness of Sun is contrasted with the soothing moonlight. Further, Moon is said to have a mother-like nurturing characteristic and rules the mind, while Sun rules the soul.

Moon is said to have been born out of the ocean when the gods churned the ocean to bring out the nectar, which they wanted to drink to attain immortality. Before the nectar came out, several beings emerged from the ocean. Moon was one of them.

In Hindu iconography, Lord Shiva wears the crescent moon his forehead. Shiva also rides the bull, which is regarded as sacred to Shiva and in Shiva temples, a bull sculpture is installed at the entrance.

This iconography of Shiva comes closest to the ideas of divinity in the ancient Fertile Crescent as we have seen in the previous posts, where Moon was worshipped as a major deity, was associated with agriculture and time cycle and bull was also an important divine figure.

However, it's not possible to say that these ideas travelled from the Fertile Crescent to India or vice versa. Because the similarities end at this superficial level. The legends, symbolism, iconography, rites and everything else is different between the two cultures.