Arts and Cultures - Sacrifice in Mesopotamia and in Ancient Persia 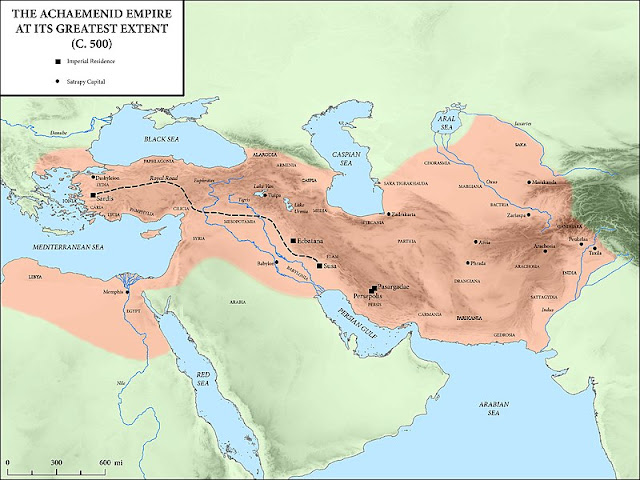 Mesopotamia was the locale of the ancient Abrahamic religion. Abraham belonged to Ur, which was a city in Mesopotamia. From there he travelled across the Fertile Crescent. In ancient Mesopotamia, sacrificing animals for the gods and goddesses was a daily practice as the deities had to be fed and be propitiated.

It was the responsibility of the king and the priests to perform the sacrifice and make the offering to the various deities. These included fattened bull, sheep, fowl and several other animals and birds. The offerings to be made to every deity was prescribed.

Coming from these roots, it was natural for the Hebrew Bible to emphasise upon Abraham's sacrifice to God. At the same time, emphasis was on the animal sacrifice and not on the human sacrifice. This was perhaps an attempt to break away from the ancient Mesopotamian tradition of sacrificing children, which many scholars have written about.

The ancient Persia followed Zoroastrianism. In mid-6th century BCE, Persian King Cyrus conquered the Fertile Crescent including Israel. At this time, Israel had multiple strands of religiosity. Yahweh was the national god, but there were pockets of worshipping other deities. In some areas, other deities were worshipped along with Yahweh as the supreme god.

Scholars are of the view that the Hebrew Bible largely shows the turmoil and intermingling that went on in this region under Persian rule which lasted till 330 BCE. This was the period when the Ancient Abrahamic religion took definite shape and most of the Hebrew Bible was composed. This is why the Hebrew Bible shows a conflict between various forms of religiosity and a stress on following Yahweh as the only god instead of other deities.

It has been long known that Zoroastrianism of ancient Persia had close links with the earliest layers of Hinduism. In Zoroastrian texts, sacrifice of animals are described as being offered to the deities in the sacred fire. The descriptions are very similar to the ancient Hindu descriptions of sacrifice.

In both Hinduism and Zorostrianism, sacrifice was offered to propitiate the deities and ask for worldly blessings. The element of God demanding a child sacrifice to test the faith of the followers is not present in either of the two religions. However, child sacrifices were present in ancient Mesopotamia, although again as acts of propitiating the deities, not as a test of the loyalty of the followers.

The deity demanding a child sacrifice as a test of loyalty of the follower is an innovation of the ancient Abrahamic religion, which was later carried into Christianity and Islam, though they took different directions in their interpretations, as has been discussed in the previous post.