Arts and Cultures - Nanna the Moon God of Mesopotamia 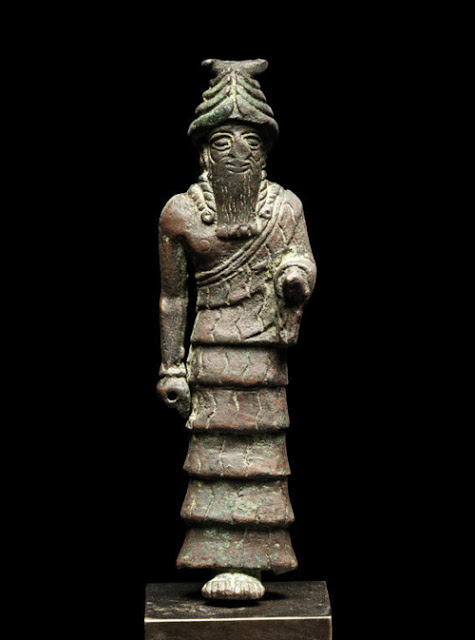 Ancient Mesopotamians worshipped Nanna as the moon god. Since months were counted by the waxing and waning of the moon and the soothing moonlight was seen as nourishing as compared to the hot sun, Nanna was regarded as the lord of time and a sustainer of agriculture, life on earth and prosperity.

He had a sanctuary within the great Temple at Ur and another at Harran. At some point of time, he came to be regarded as the king of all gods. In late period in the 6th century BCE, the king's mother was a priestess at the Harran sanctuary of Nanna, while his daughter was a priestess at his Ur sanctuary. This gave the king immense validity over his people.

Nanna was the son of Enlil and the father of Shamash the sun god, Ishtar or Inanna and her elder sister Ereshkigal.

As a keeper of time cycle, he could see the past. Hence, although Ereshkigal was the queen of the netherworld, she didn't pass judgement on the dead. They just descended to the netherworld from where there was no return. At some point of time, Nanna became the judge of people's deeds and giver of their position in afterlife.

There were poems composed in the honour of Nanna. In one such poem, he sailed upstream the river in a boat full of plants, trees and other gifts for his father Enlil. They both dined together and Nanna asked for the blessings of prosperity for the life forms, abundance in harvest and timely rain etc. Enlil granted all this.

His iconography often showed him reclining in a crescent moon-shaped boat and his insignia was the winged bull.

His worship spread across Sumer, Akkadian region, Hittite region and also in Canaan.