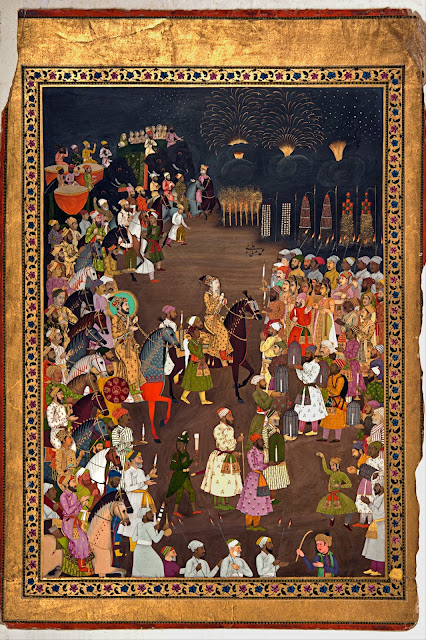 After the advent of Islam, some ancient Arabian marriage practices were continued, while new ones were added. Girls began to be married off young - nine years seems to have been a common age for the marriage of girls. A prospective groom approached the male guardian of the girl and asked for the girl's hand in marriage in exchange for a bride price. Usual practice was that the male guardian fixed the marriage with the man who paid the highest bride price. This was despite the fact that Islam enjoined upon the Muslims to marry a woman who was most steadfast in her Islamic faith, rather than because of her beauty or wealth or family status.

Payment of the bride price became mandatory. However, in early Islamic days, bride price need not have been money. It could have been any act acceptable to Islam, such as teaching the Quran to the wife after marriage.

Technically, the girl's consent to the marriage was essential. However, a girl who had never been married before was expected to keep quiet when asked. Her silence was taken as consent. Further, even if she had been married earlier, there was the injunction that children should not go against their father's wishes in any matter. This automatically pre-empted the girl's refusal to a match that her father had arranged, or to bring a suitor on her own. In case of orphaned girls, the State acted as their guardian and could marry them off to any suitor it deemed appropriate.

On the wedding day, the groom's family had to give a feast to the guests. This was mandatory.

The bride came to stay with her husband and was expected not to leave the house without her husband's consent, if he was providing for her lodging, clothes and food, which were his obligations towards his wife. The wife had to take care of the household. Giving away the children to wet nurses continued in the Islamic period.

Polygyny was practised and the number of wives was restricted to four. Divorce was quite common, especially if a man wanted to marry a fifth wife, then he divorced one of his previous wives to keep the number restricted to four. Man had the right to initiate divorce and he was obliged to provide for a living place for the divorced wife. Wife could not divorce her husband unless he was impotent or wasn't providing for her. Even then, there was no surety that she would get the divorce. If she did, she wasn't entitled to any payment from her husband.

Apart from four wives, a man could have any number of concubines. All recognised children, whether from wives or from concubines, were entitled to inherit their father's property.

Veiling became strict and women were expected to stay inside their homes and not interact with any man who was not their guardian i.e., husband, father, uncle, son or brother. This also meant that women's activities in the public life decreased. Often, if they wanted to do business or engage in a handicraft, they had to take help from their husband or other male members of their family to deal with the outsiders. Men were expected to interact with women from behind a screen and not go to the inner apartments of the house where the women stayed.

Islamic marriage could be performed only between two Muslims. Further, two Muslims who didn't belong to the same tribe could marry. Marriage with cousins was a common practice. Adoption of children was disallowed after a few years of Islam. Only direct biological children could inherit.

Homosexuality was forbidden by Islam, but was widely practised, especially in later centuries among the aristocratic families.

In later centuries, concubinage became common among the elite class Muslim men, who usually didn't recognise their children born from concubines, to avoid giving them a share in their property.

Islam forbade prostitution, but allowed concubines if the concubines stayed with a single man at any point of time. If the man deserted them or if his wealth decreased, they could align with another man.

In both the regular marriage (Nikah) and the Misyar marriage, a contract was drawn with witnesses. However, in the earliest years, the contract may not have been written, but could be a simple oral oath taken before God and witnesses. This was because most early Muslims were not literate. Even later, women were often not literate.

The concubine need not have been a Muslim.

Slaves were allowed and usually, they were brought from non-Arabic countries. Slaves were tied to a household and their master had to take care of their maintenance. They could sell them if they wished, or set them free.

The wife was expected to follow her husband's orders and to take care of him in the house. He was entitled to beat her if she didn't obey him or if he suspected her to be unfaithful.