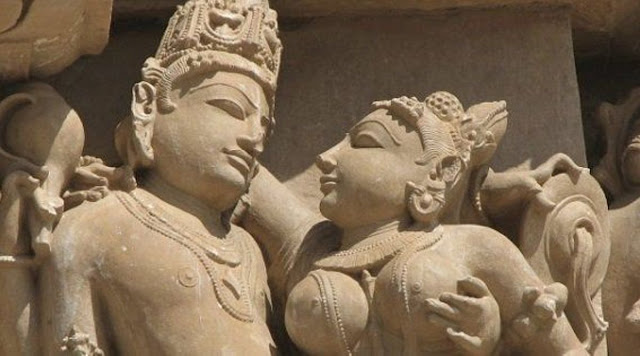 Ancient India gives the most surprising evidences from the past in terms of marriage and social practices. It's a complete reversal of what is known as "traditional" in today's India. It appears as if India has been travelling in reverse direction to the rest of the world.

In the Vedic period, which was the most ancient phase of Indian history about which we have records, couple were enjoined to marry among equals in terms of education, skills and other qualities. Fathers of girls were asked to educate their daughters and to teach them various skills. There was no bride price or dowry. Rather, a groom was enjoined to pay wealth to the bride if he was inferior to her in some way. Both sides of families gave presents to each other, but this was neither bride price nor dowry.

Girls had rights to inherit property and to manage it on their own. Their husband could not take away their property from them. Further, when a daughter married, her father gave away her share of the inheritance to her which she owned and managed by herself.

At the time of the wedding, the groom had to accept to fulfil some conditions. Only if he consented to these conditions, did the woman become his wife. These included sharing his life's happiness, prosperity, wealth and all matters with her, asking for her advice before disposing off property or making any important decision about wealth, household or work, never mistreat her, always treat er with respect, making efforts to keep her happy and so on.

Quite contrary to today's Indian society, majority of references in ancient Indian literature are of women finding their own husband, rejecting a suitor if they didn't like them, approaching men for marriage on their own and even getting married to them without parental permission and living with them. In some cases, a wedding ceremony was not observed and the couple began to live together. However, in most cases, wedding ceremony was observed. Father's consent was not essential to getting married. Usually, a couple decided to get married and informed their parents of their decision. Parents then organised their wedding ceremony. There do not seem to be many references of arranged marriages in entire vast corpus of ancient Indian literature.

Manusmriti datable to 3rd century BCE to 4th century CE - which is quite a late period by the standards of Indian historical timeline - talks about 8 forms of marriages which include arranged marriage, marriage by purchasing the bride, marriage by abduction and so on, in addition to marriage by choosing one's spouse by oneself. However, this reference seems to be more the imagination of the writer of this text than a realistic description, as there's not much corroborative evidence to support this list. Further, one must remember an important aspect while reading ancient Indian literature - although India has many so-called "prescriptive texts" from the ancient period, none of these texts was mandatory upon the society to follow. At best, these are thoughts of scholars of their age and any other scholar could refute anything written in older text and compose a new text. The society was not expected to follow any of these texts and they were never followed to the letter by the society.

The entire corpus of ancient Indian literature, going back to thousands of years, talks about women independently choosing their husband, without their parents playing any role in them. This includes Hindu, Buddhist, Jain literature.

Marriage had to be fixed with a person of equal qualities who was not related by blood to the woman. Usually, marriage within one's own blood line, even if removed by several generations, was not regarded as valid. A custom evolved by which professional genealogy writers used to maintain records of families, so that parents could check these records to ensure that the couple didn't have any blood relation. In some small groups, mostly in South India, marriage to a cousin or a maternal uncle was allowed. This seems to have been a practice coming from other cultures with which India was always in contact and such groups were small in number.

Alternatively, the king invited all the princes from other kingdoms and they were seated in a royal assembly. The princess came to the assembly with a garland in her hands. Her maid went around with her and introduced all the princes, describing their lineages, their wealth and power, their educational qualifications, their warfare skills and so on. The princess decided whom she wanted to marry and presented the garland to that prince.

Ancient India had no practice of veiling of women. We have no reference to veiled women in art or literature from ancient India. Rather, women wore transparent fabric which was highly valued and they may not have worn a tunic over the top half of their body, as is suggested by the innumerable sculptures and paintings from ancient India and also by the descriptions in the ancient literature. Women went out and freely moved around in public without any restrictions. Women were often skilled in dance, music and singing, quite contrary to the more recent centuries, when these became professions of the courtesans.

When and how all this was overturned and arranged marriage, veiling of the bride and forced dowry became the norm in India, is a subject of in-depth research. These were certainly not prevalent practices in ancient India. There's nothing traditional about these so-called "traditional" practices in India.
Read more about arts and cultures here
Read global news here
Read Technology Today digital magazine here
Art Culture featured South Asian Art South Asian Paintings Vedic Culture