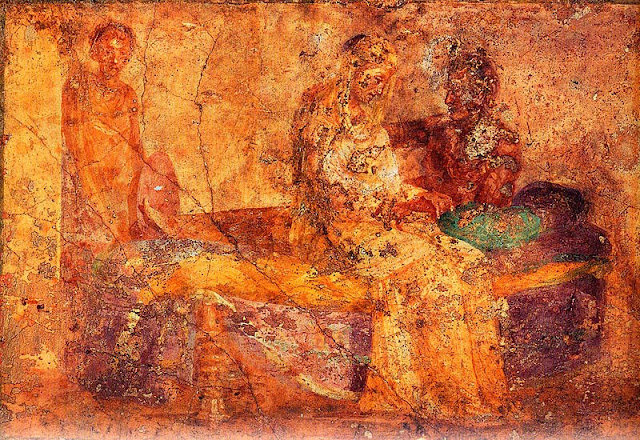 Some marriage practices in ancient Rome came from ancient Greece, but some were different. As in ancient Greece, marriage was solemnised to perpetuate the family line. We have evidences of mostly the aristocratic families about marriage. Only two citizens of equal social status could marry. Marriage between unequal citizens or between a citizen and a slave was illegal and children born from such relationships were regarded as illegitimate and could not inherit property.

Amongst the aristocratic elites, arranged marriage was the norm, where the fathers of two families agreed to enter into a social relationship based on the marriage between their children. The eldest male was the head of the family and he had the right to arrange the marriages of the men and women in his family, which he could do even when the bride and groom had not come of age. It was mandatory for women of 20 to 50 years and men of 25 to 60 years to remain married and have at least three children for the upkeep of the State, or pay high taxes. Usually, an aristocratic girl married younger than the girls of lower social strata. The age for marriage was 12 or the girls and 14 for the boys.

Monogamous marriage was strictly the rule.

Dowry was given by the bride's family to the groom's family. There was no bride price.

Unlike ancient Greece, both men and women could inherit property. Upon marriage a woman's husband could own the property, but could not sell it away, as the woman could not be alienated from it. Even after marriage a woman had to show deference to her family's male head, even more than to her husband.

Both husband and wife were regarded as equal owners of the family property.

After the wedding ceremony was over, the husband's family was supposed to offer a sacrifice to the family deities.

Both husband and wife could initiate divorce. A divorce didn't have to be recorded at the registrar's office. The wife could simply take her dowry and her property and return to her father's house. Usually, before a divorce was finalised, both families, their friends, husband and wives had a discussion about it. There was no stigma attached to divorced, though there may have been gossip.

The husband had no longer any claim to the wife's property after divorced. In case of children, either party could claim a share in the property of the other party on account of children's upkeep. Remarriage of both men and women after divorced was encouraged, as it involved property ownership. A woman who had children and got a divorce had more freedom in her choice of subsequent husbands, which she didn't have when she married for the first time.

Concubinage between free citizens of unequal status or between a free citizen and a slave was quite the norm. A husband could have concubines in addition to a wife.