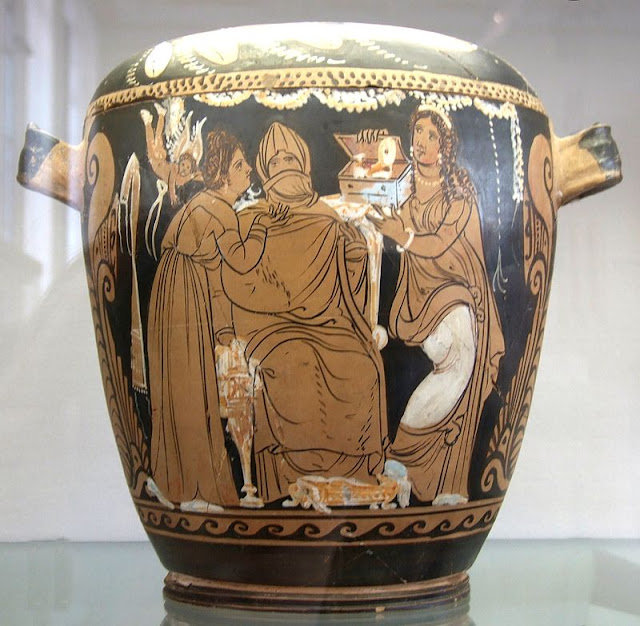 In ancient Greece, marriage was regarded as a State responsibility to give children for the upkeep of the State. We have records only about aristocratic citizens' marriages. Not much is known about lower-classes and slaves' marriages. There was a rule that every free citizen had to marry by the age of 35, otherwise he had to pay fine or be punished for not fulfilling his obligation to give children to the State.

Property belonged to men, but women could inherit their father's property and on marriage their husband came to posses it. Women couldn't be alienated from their property if their father died without a male heir. Hence, it was essential for a male kinsman to marry such a woman to retain property in the family. Usually a paternal uncle or cousin lay claim to marrying such a woman and inherit her property and she could not refuse. If she was married and her father had not made her husband a legal heir to his property while he was alive, then such a woman's marriage had to be terminated by divorce and a kinsman had to get married to her and inherit her property.

Marriages were monogamous, but men could live with a wife and a concubine. If the wife consented, then the concubine's children could inherit their father's property.

Marriages were arranged by the bride's father with the prospective groom. The groom gave presents to the bride's father to win the bride, but these presents were not regarded as bride price. On having selected a son-in-law, the bride's father arranged a betrothal ceremony where in front of friends and relatives the two parties consented to the match and the dowry that the the father of the bride would give to the groom was decided at this occasion. Dowry brought by the bride was an important part of ancient Greek marriages. During the wedding feast, men and women ate separately, women waited for the men to finish eating.

Girls were married at 12 to 16 years of age and they could not choose their suitors. They had to go by their father's choice or marry the first male kinsman to inherit their property if their father died.

The bride came to the groom's house wearing a veil and when he removed her veil, the wedding ceremony was regarded as complete.

In ancient Greece both men and women could initiate divorce. The husband could simply send the wife back to her father's house. The wife had to go to a registrar's office and get the divorce documented. The registrar however, had no say in the matter if the wife had decided to divorce her husband. The husband had to return her dowry on divorce and she had to remarry the next kinsman suitor to inherit her property.