Arts and Cultures - Islamic Code and Comparison with Mesopotamian Codes 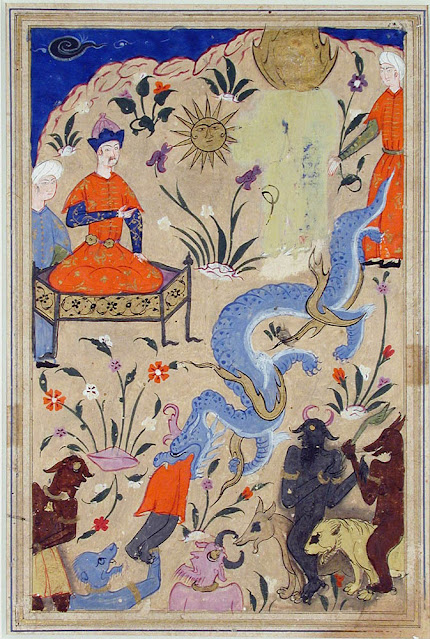 Moses Before the Pharaoh in Egypt

In the previous posts we have seen the evolution of capital punishment and the intertwining of religion with State in ancient Mesopotamia and its continuation in the ancient Abrahamic society. Islamic society that arose in Arabia expressedly adopted the religion taught by Abraham as he had received it from God. Hence, Islam in principle accepts the basic tenets of the Abrahamic system, although in many places its interpretation may differ in Islam.

Islamic law is based on Quranic verses and their connection to the Hadiths i.e., narrations about Prophet Muhammad. Both of these when interpreted together form the Shariat or Islamic law. When we compare these injunctions with the Mosaic law (Law received by Moses), we find many similarities between the two, as Islam itself says that it is perpetuating the Abrahamic system.

Some examples of the similarities between the two systems are -

Bride price to be paid by the groom before marriage is a must. Husband is responsible to provide for the wife's food, clothing and shelter. Seclusion of women and veiling are practised, as were also practised in the ancient Abrahamic society. In early Islam, husband only had the right to divorce his wife and he was enjoined to return her dowry and give her a place to live in, which could be a house or a separate room in the husband's house. Wife could initiate the divorce only if she could prove that her husband mistreated her, was impotent or wasn't providing for her. There was no surety that she got the divorce and if she did, her husband was not obliged to pay her anything. While married, wife was responsible to take care of her household. Muslim women could own property, but their husband usually managed their property on their behalf. Woman was expected to be a virgin on her wedding night. If a couple were caught in an adulterous act, both were stoned to death.

Death punishment was given for murder, rape, robbery, adultery and for turning against Allah, as was also the case in the ancient Abrahamic society. Islam makes the intertwining of religion and State mandatory.

Quran 5-45 has the much-quoted verse, which says that Allah ordained for them in the Torah, A life for a life, an eye for an eye, a nose for a nose, an ear for an ear, a tooth for a tooth—and for wounds equal retaliation.

In spirit, this is a direct copy from the Code of Hammurabi, coming to the Quran via ancient Abrahamic religion.

As in the Mosaic law, so too in Islam, the Islamic law was an obligation towards God.

There have been many varied interpretations of different Islamic injunctions within the Islamic exegeses itself. For example, if a man accused a woman to have indulged in adultery, he was expected to produce 4 witnesses. Failing to do so could result in his death. The verse for stoning the adulterers is not found in the Quran and many Islamic jurists don't accept it, while others do. Similarly, many Muslims argue that veiling is not an Islamic practice, while others think it's a mandatory order from God.

In reality, veiling was practised in ancient Mesopotamia as well as in the early Abrahamic society.