Arts and Cultures - Hagar and Ishmael in Islam 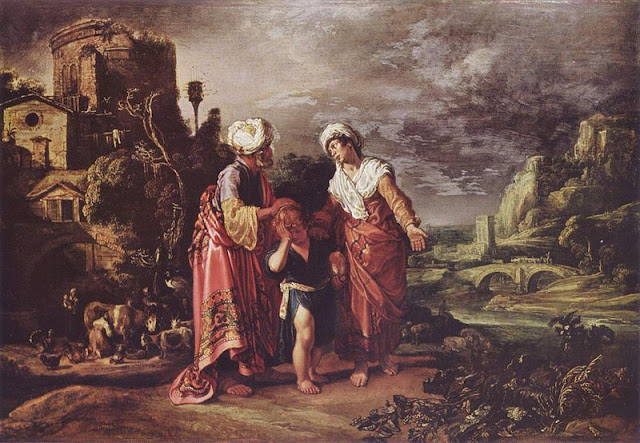 While the Hebrew Bible elaborates upon the legend of casting out of Hagar and Ishmael by Abraham, the Quran does not really mention this episode. Even Hagar and Sarah are not mentioned in the Quran by name. Quran does have a chapter on Ibrahim (Abraham), where Ibrahim is shown as praying to Allah and thanking him for blessing him with two sons, Ismail (Ishmael) and Ishaak (Isaac). Ibrahim says in his prayer that he has settled some of his offsprings in a valley without cultivation "close to the House" (Bait).

In chapter 19 again, Ismail is said to be a noble person who paid the ordained Zakat (alms-tax for the maintenance of the poor) and urged the people to pray and he is referred to as a Prophet and a messenger of Allah.

The legend of Abraham casting out Hagar and Ishmael however, does not exist in the Quran, nor does it explain where exactly the valley without agriculture lay, because the "House of Worship" is not clearly defined as Makka. The term is simply "Bait", which means a house; by extension, it may mean a house of worship. This is in sharp contrast to the Hebrew Bible, where the desert of Paran is clearly mentioned.

Despite this non-clarity about this legend in the Quran, the Islamic world pays great reverence to Ishmael not only as a Prophet, but as an ancestor of Prophet Muhammad and one who settled the region around Makka and built the Kaba.

The legend as narrated by the Muslims says that when Abraham sent Hagar and Ishmael out, they actually came to the place where Kaba is situated today. On being thirsty, an angel showed them a well, which is known as Zam Zam today. Ishmael settled there, married some local women and became the progenitor of the Arabian tribes. In this version, Hagar is said to be a second wife of Abraham.

A question naturally arises that if the Quran does not narrate the legend of Hagar and Ishmael, then where does it exist in the Islamic canon? Sahi Bukhari, the most prominent Hadith (traditions of Prophet Muhammad as narrated by the Muslims in a chain going back to his times), which is regarded as second only to the Quran, narrates this legend in full. However, Bukhari is datable to the latter half of 9th century CE, after more than 200 years of the death of Prophet Muhammad. The Quranic exegetic texts written much later than the Bukhari Hadith also elaborate upon this legend.

The Quran however, is silent on this legend.