Arts and Cultures - Goddess Inanna the Queen of Heaven 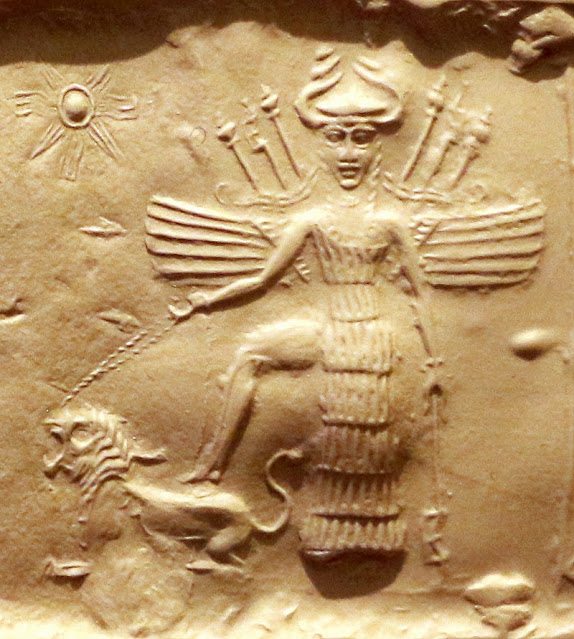 Most ancient religions had the conceptualisation of a great goddess who was associated with warfare and victory in battle. Mesopotamia and Canaan were no exception to this. She was widely worshipped in Sumer, Akkadian region, Babylonia and Hittite and Assyrian regions.

The main symbol of Inanna was an eight pointed star representing her as the queen of heaven. She was associated with the lion as the symbol of power. She was also associated with love. However, her main identity was that of a war goddess. The Assyrias ranked her higher than their other gods.

Akkadians had the goddess Ishtar who was associated with warfare. Gradually, Inanna and Ishtar came to be identified with each other and were regarded as two names of the same goddess. Both were associated with Venus and were regarded as supreme goddesses. They subsume the identities of various local goddesses in them. Ishtar was also known as the queen of universe, as was Inanna. Both Ishtar and Inanna were not really regarded a mother goddesses.

Although Ishtar/Inanna were war goddesses, they were not all powerful, as the legend of Inanna shows her descending to the netherworld where she is forced to shed her clothes and is overpowered by Ereshkigal the ruler of the netherworld. This legend shows Inanna/Ishtar in a powerless image, not suitable for a powerful goddess of warfare.

Because of Inanna/Ishtar's association with warfare and the lion being their symbol, some scholars have attempted to show the evolution of the Hindu Goddess Durga as an influence of the ancient Mesopotamian religion. However, later scholarship has rejected this hypothesis as it is regarded as an over-simplistic derivation, since Durga's identity is much  more complex and a lot more powerful than that of Ishtar or Inanna.