Arts and Cultures - Flood Legend of Utnapishtim of Sumer 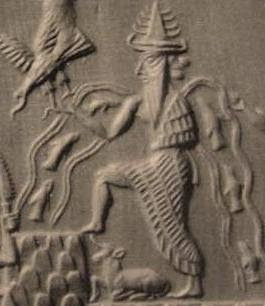 The third legend of Flood from Mesopotamia is related to Utnapishtim, king of Shuruppak. This narrative comes from the Epic of Gilgamesh. The most preserved tablets of this epic are datable to 1300-1000 BCE. Gilgamesh is said to be a king of Uruk in Mesopotamia, who ruled between 2900-2350 BCE. Utnapishtim was his ancestor. At the end of epic, Gilgamesh meets Utnapishtim in a distant land where Utnapishtim has attained immortality. He narrates to Gilgamesh the legend of Flood and his attainment of immortality afterwards.

According to this version of the legend, Utnapishtim was tasked by Enki, also called Ea, the god of underworld and sea water, to build a boat of solid timber to save the living beings from a great flood. Utnapishtim builds the boat and brings all humans, plant seeds and animals on board his boat. He seals the doors of the boat. The boat rests on the peak of Mount Nisir, which had not submerged in flood. The rains rage for 7 days and nights. After 7 days, the rain stops. Utnapishtin sends out a dove. However, the dove comes back as it doesn't find any land to sit on. All land is submerged in flood. Utnapishtin then sends out a swallow. It also returns as there is no land visible. He finally sends out a crow. By this time the water has receded and the crow does not return. Then Utnapishtin opens the door and lets all humans and animals to go out. The creation is thus saved. He makes a sacrifice to the gods, who make him and his wife achieve immortality.