Arts and Cultures - The Flood Legend in Ancient India 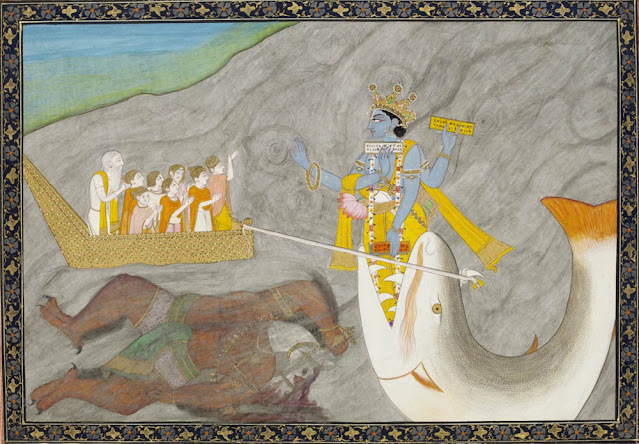 Ancient India had its own version of the Flood legend, which seems to have some similarities with the ancient Mesopotamian legend. The earliest version of the ancient Indian legend occurs in Satapatha Brahmana, a later Vedic text datable to c700 BCE. In this, Manu the ancient progenitor of humas is warned about the coming flood. Manu builds a boat an the seven immortal sages climb the boat along with Manu and his wife Satarupa. All the grains of the world and animals are also onboarded. Manu also carries the 4 Vedas, the most ancient Sanskrit texts of Hinduism. The boat floats to the Mount Meru, a mountain mentioned in the ancient texts of India. After the flood recedes, the animals and humans descend from the boat. Thus, the life forms as well as the ancient texts of Hinduism are saved.

In a later and better known version found in Matsya Purana datable to 5th century CE, the boat is too heavy to float with all the load in it. Manu prays to Lord Vishnu, who is one of the great gods of Hinduism. Vishnu appears in the form of a huge fish and tows the boat with his strength towards the mountain so that it doesn't sink. In this journey, Vishnu also kills an demon (antithesis to gods) emerging from a huge conch in the sea who tried to attack Vishnu in the fish form. Vishnu carries the four Vedas in one of his 4 arms. It is this version that has found illustration in innumerable paintings and sculptures from pre-modern India.