Arts and Cultures - Flood in Genesis and Comparision with Babylonian Text 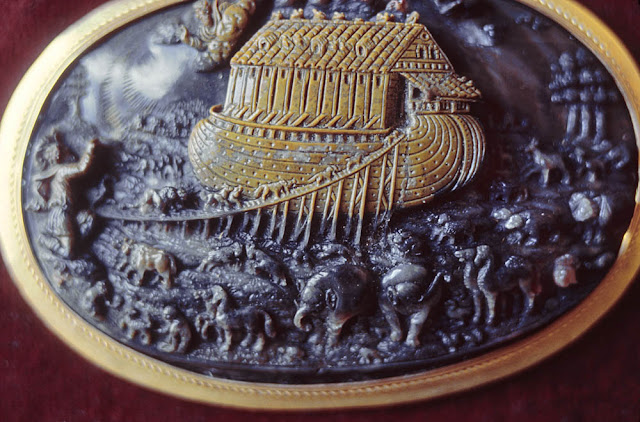 The legend of Flood as given in Genesis of the Old Testament of the Bible is the most commonly known legend of the flood. God decides to destroy humanity as humans have become disobedient and unmindful of God's commands. But God warns Noah about his plans and chooses him to save the life forms. He builds an ark which has 3 levels and takes in 7 of clean animals and a pair each of unclean animals with his family and seals the ark.

There are variations in the Genesis, as after 7 days of storm, the flood is said to last for 40 days in Genesis 7-17, while it's said to last for 150 days according to Genesis 7-2. Further, it has been observed that the Genesis legend has similarities with the Epic of Gilgamesh narrated earlier in this website. The Hebrew word for sealing the ark is closely related to the Sumerian word. The Hebrew word for ark is also closely related to the Sumerian word for an oblong boat.

On the other hand, there are differences as well. The Atra Hasis' vessel was circular; Utnapishtim's boat was a cube. Noah's ark was a rectangular with 3 tiers. Further, in Mesopotamian versions, the reason for the Flood is not God's wrath because humans have disobeyed him, as is the case with the Genesis version.

However, the core of the story has definitely been taken from Mesopotamia by the Genesis writers, who transformed it to suit the early Abrahamic faith.

Scholars have also read symbolism in Noah's legend. It is said that the ark symbolised the Jewish Temple as its dimensions were related to the Temple, which symbolised the microcosm of the universe. The legend itself symbolises the rescue of those who obey God's commands while those who don't obey, perish. The ark symbolises the Abrahamic faith which saves humanity in this symbolic interpretation. This symbolic reading has been greatly emphasised by Christianity, which stresses upon the ark as a symbolism of faith in Jesus which rescues the believers.