Arts and Cultures - Code of Hammurabi 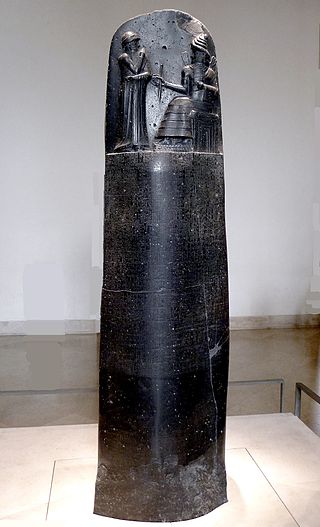 Code of Hammurabi is the most famous legal code discovered from ancient Mesopotamia. It is also most complete among all the Mesopotamian codes found so far. Datable to 1750 BCE, it gives detailed injunctions about every aspect of life in ancient Mesopotamia. Because of its extensive details, it has been studied in-depth by the scholars. It began to be copied for about a thousand years after Hammurabi.

The code is inscribed on a stele which is now in the Louvre Museum.

Some of the injunctions given in the code are -

If a man accuses another man of murder but cannot prove it, the accuser shall be killed.

If a man gives false witness, he shall be killed.

If a wine seller does not take grain for the price of a drink but takes money by the large weight, or if she makes the measure of drink smaller than the measure of grain, they shall call that wine seller to account and throw her into the water.

If a man is in debt and sells his wife, son, or daughter, or binds them over to service, for three years they shall work in the house of their purchaser of master; in the fourth year they shall be given their freedom.

If a man wishes to divorce his wife who has not borne him children, he shall give her money to the amount of her marriage price and he shall make good to her the dowry which she brought from her father's house and then he may divorce her.

If a man destroys the eye of another man, they shall destroy his eye.

If he breaks another man's bone, they shall break his bone.

In comparison to the earlier Mesopotamian codes, where usual punishment was financial payment except in case of robbery, adultery, murder and rape, Hammurabi's code appears more severe.

There are death sentences for a lot of crimes. Hammurabi also introduced the concept of "An eye for an eye, life for life," which became the norm in later times.

Scholars have found a lot of similarities between the Code of Hammurabi and later laws.