Arts and Cultures - Ba'al The Lord God of Canaan 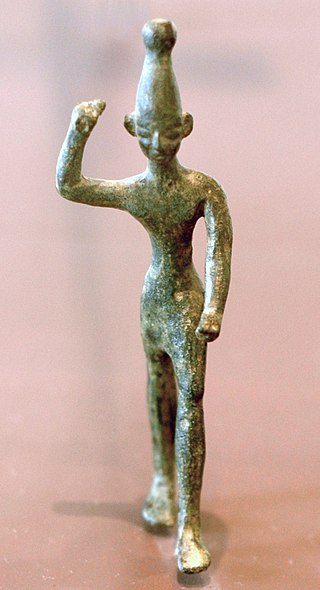 Ba'al was a major deity worshipped in Canaan and in other related cultures of Fertile Crescent, including Ugarit in Western Syria and in Mesopotamia. Ba'al meant "owner" and also "Lord." It was applied as an epithet to many deities of this region. But most prominently, it was associated with Haddad the deity of rain, storm and thunder, who was thought to be the most prominent deity, as agriculture depended upon him.

It is thought that as Haddad rose in prominence, he began to be referred to as Ba'al rather than by his own name. This was a common practice in the entire region in ancient times. "Bel" meaning "Lord" or "Master" was used for Marduk, the patron deity of Babylonia and "Adon" meaning "Lord" was used for Yahweh.

In Ugarite text Ba'al is referred to as the son of El among many sons and both El and Ba'al are associated with bull as a symbol of power and vigour.

With the spread of Phoenician power, the worship of Ba'al spread to the Mediterranean.

In the Hebrew Bible there is a contest between Ba'al and Yahweh through Elija, in which Yahweh is shown to win. This is said to signify the dominating position that worshippers of Yahweh i.e., Israelites acquired over the worshippers of Ba'al i.e., Canaanites. The Quran also mentions this in chapter 37.