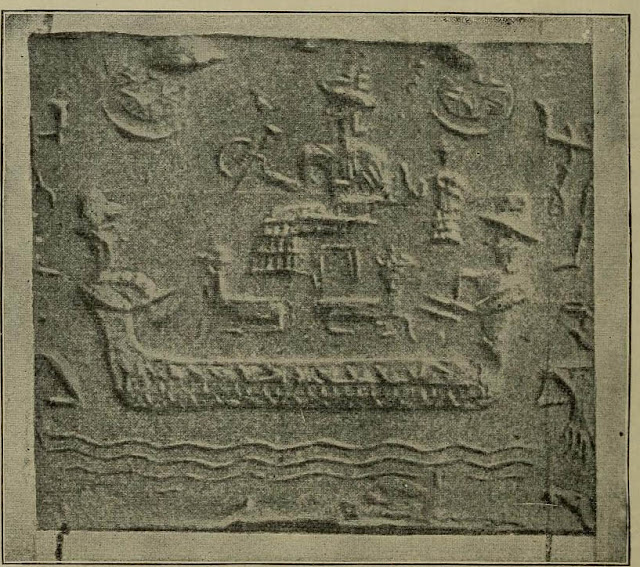 In ancient Mesopotamia, the legend of the Flood continues to be found after the legend of Ziusudra discussed in the previous post. We have tablets found from 1650-1626 BCE written in ancient Akkadian language, which narrate the legend of Atra-Hasis, the king of Shuruppak. This is the most complete version of this epic. However, older versions of the epic exist in fragments and it is believed that the legend goes back to 2600 BCE or older.

According to the Akkadian version of the epic, Sumerian deities Enki of the underwater and Enlil of the earth and wind were concerned about the overpopulation of humans on the earth. Enlil sent droughts and famines at intervals of 1200 years. However, the population of humans continued to grow. Finally, Enlil decide to exterminate the human population by sending a great Flood.

Enki was bound by oath not to tell the secret of the coming Flood to the humans. Hence, he hid behind a wall of reeds and warned Atra-Hasis the king about the Flood and told him to save plant, human and animal lives. He advised him to leave his house, build a great boat and go onboard with all his family and kins, animals and pants and seal the doors of the boat during the Flood.

Atra-Hasis followed the instructions of Enki and built the boat. He took aboard his family, kins and other humans, seeds of plants and animals. He then sealed the boat with bitumen. The storm raged for 7 days. After 7 days, storm stops. Atra-Hasis opens a window and sees the sun rising. He sacrifices animals to propitiate the gods. Thus, the animals, plants and humans were saved from the Flood. Enlil was greatly enraged at Enki's revealing the secret to Atra-Hasis. But Enki says that he save the creation from ending. The two gods decide to bring down the population through other means in future.