Arts and Cultures - Abraham's Sacrifice and the 3 Abrahamic Religions 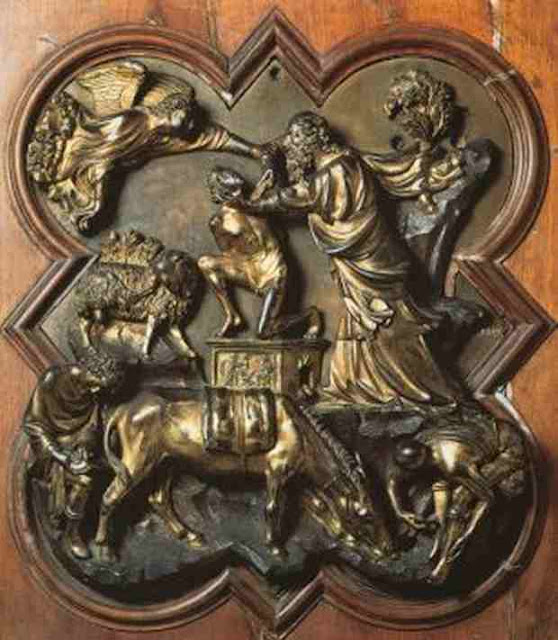 Judaism, Christianity and Islam refer to the ancient Abahamic religion as their foundation. However, three of them have taken different directions, eventhough they subscribe to the same legends in many cases.

Abraham's binding of Isaac and the sacrificial animal being replaced by a ram was central to early Judaism, when the Jewish Temple still stood on the Temple Mount. Early Judaic people were obliged to offer rams as sacrifice at the Temple altar on ceremonial occasions and also as a show of gratitude to God when they achieved something of importance.

However, Judaism takes the view that the sacrifice can be made only at the altar of the Jewish Temple on the Temple Mount and since the Temple no loner exists, the sacrifice has also stopped. If the Jews get their Temple back, they may resume the sacrifice again, although this is in distant future.

Christianity has an elaborate interpretation of Abraham's sacrifice. Jesus is likened to the sacrificial lamb and Christians regard the crucifixion of Jesus as the sacrifice made by God of his only son, same as Abraham went to sacrifice his only son.

However, there are also differences. In Abraham's case, a ram replaced his son as the sacrificial animal. On the other hand, in Jesus' case, there was no replacement and Jesus had to be crucified.

In contrast, Islam venerates Jesus as a Prophet who preached the ancient Abrahamic religion. However, Islam doesn't accept Jesus as a son of God. Nor does Islam accept the destruction of the Jewish Temple as a reason to stop the sacrifice to God. According to Islam, sacrificing an animal to God to commemorate Abraham's sacrifice is mandatory and it in a sense renews the believers' covenant with God. Because of this, sacrifice to God is celebrated once a year and it's an important festival of the Muslims. Only the Muslims who don't have the means to make a sacrifice are condoned from this obligation.