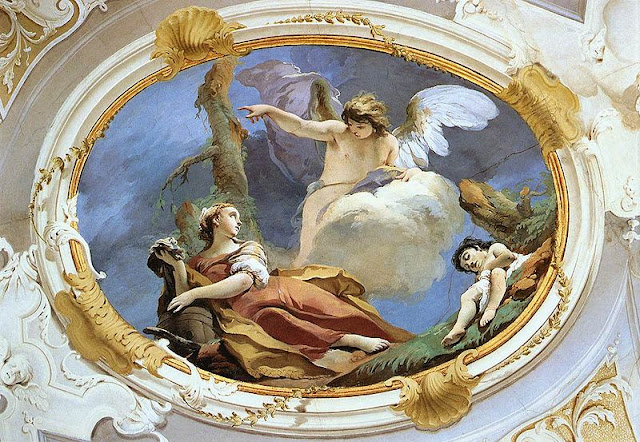 The Genesis book of the Hebrew Bible has the legend of Hagar and Ishmael, the first born son of Abraham. They lived in Canaan along with Abraham and his wife Sarai (Sarah). Hagar was a slave woman of Sarah. When Sarah didn't have a child, she gave Hagar to Abraham who became pregnant and was about to bear him a son called Ishmael. However, the two women didn't get along when Ishmael was about to be born and Sarah mistreated Hagar so that she left the house. But God's angel commanded her to return and she returned and gave birth to Ishmael. After he was a few years old, Sarah also gave birth to a son called Isaac. Sarah didn't want Ishmael to inherit Abraham's property, so she asked him to cast out Hagar and Ishmael. God asked Abraham to do as Sarah said.

Hagar and Ishmael wandered in the desert and were shown a well of water by God to survive and they settled at Paran.

It appears that Paran was not far from where Abraham, Sarah and Isaac lived, because Ishmael is said to be present by Abraham's bed when Abraham died and he and Isaac together buried their father.

Further, Abraham's eldest grandson Esau went to the place where Ishmael lived in Paran and married a woman from Ishmael's household. Traditionally, Paran has been identified in Israel, not far from Beersheba, where Isaac the father of Esau had settled.

It appears that the writers of Genesis narrated the legend of Hagar and Ishmael as both wandering in the wilderness and God showing them water and promising a nation to Ishmael, but they didn't see the wilderness very far away from Beersheba. It appears that Hagar and Ishmael just left Abraham's house and settled nearby, so that Ishmael could visit his father and Esau could visit Ishmael.

If we look at the laws of ancient Mesopotamia, it was said in an earlier post that Mesopotamian men usually took concubines with the consent of their wife and if concubines bore children then they had a right in the inheritance of the property. The Hebrew Bible also suggests that it was the eldest son who inherited and the other siblings followed the eldest son's instructions. Abraham's son Isaac wanted to pass on his mantle to his eldest Esau but his wife Rebecca tricked him into giving the mantle to the younger son Jacob by sending him dressed like Esau to Isaac's bed.

We also have the reference that Isaac sent his other sons from concubines away with gifts, because he didn't want them to inherit his property.

Since Ishmael was the eldest and also he was a son of Abraham, it meant that after Abraham, he would have inherited and Sarah and Isaac would have lived under his protection and instruction. He would have been the head of the household after Abraham. This was not acceptable to Sarah as Hagar had been her slave. The Hebrew Bible says that she asked Abraham to send Hagar and Ishmael away because she didn't want Ishmael to inherit.

The legend shows that even though Abraham had left Mesopotamia and had settled in Canaan and had begun to worship Yahweh instead of traditional Mesopotamia deities, he still followed the social practices of Mesopotamia. He in fact sent his attendant back to his ancestral household to bring a wife for Isaac.

The ancient Abrahamic religion only stressed upon a loyalty towards a single God. It didn't really interfere with the social practices of the people of Mesopotamia.