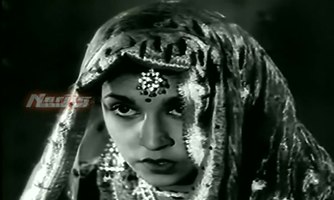 Mahal 1949
Mahal was a landmark film in that it catapulted Madhubala, an erstwhile middle-range actress, to the peak of stardom which endured till her premature death in the mid '60s and it was the beginning of the ascension of Lata Mangeshkar as the reigning empress of Hindi film music for 6 decades with the other song in this film "Aayega aayega aanewala", which made Lata immortal with the subcontinental mass hysteria it created. However, when Mahal was being made, no one had foreseen these major overturning of fortunes of Madhubala as an actress and Lata as a playback singer. Till this time in 1948, both were struggling to meet ends against a galaxy of singing and acting stars. In fact, Mahal uses several other actresses in equally important roles and it also uses several other singers who were important names in the pre-Lata era of Hindi cinema. One such singer was Rajkumari - who was in fact the first playback singer of Hindi cinema. She used to act and sing her own songs in the 1930s, but in 1939 she decided to stop acting and sing only for other actresses who couldn't sing, but enacted her songs on screen. She thus, gave rise to the professional playback singing genre in the real sense. Other playback singers followed her, this trend culminating in the unmatched success of Lata Mangeshkar. Ironically, Mahal marks the beginning of Lata's successful singing career and it also marks the beginning of the downslide of Rajkumari's popular singing career till then, along with that of many other singers who sang in the old style. Lata has often been accused of killing their singing career, but the reality was that everyone wanted to listen to only Lata, she could sing in the entire range of all the octaves, especially singing in the higher octaves was her expertise which none of the older singers could match and she could learn a tune with very little practice, thus cutting down on the recording time. Because of this, majority of the actresses began to get it entered into their contracts that their songs shall be sung by Lata only and no producer or director could dare to break this contract. This was the reason for the other singers losing out to Lata. Rajkumari sang in the pre-Lata style, but she had a sweet voice which was different from that of other singers of her time. Because of this, she retained her prominent position which was matched only by Shamshad Begum in this era. This film marks the turning point of the Hindi film music and showcases both the outgoing and the new singing trends -
"If we hit our head against a wall in anxiety, it would be better,
There are hundreds of sorrows in this life, if we die it would be better,
He should see the sight of the sinking of my heart,
if tears fill in my eyes, it would be better,
Whatever has to befall me, should befall in one go,
If His atrocities become obvious, it would be better..."
Film - Mahal (1949)
Singer - Rajkumari
Acting - Vijaylakshmi
Lyrics - Nakhshab
Music - Khemchand Prakash
Read more about arts and cultures here
Read global news here
Read Technology Today digital magazine here
Art Culture Dr Archana Verma featured Hindi film songs History of cinema Indian classical music Lata Mangeshkar