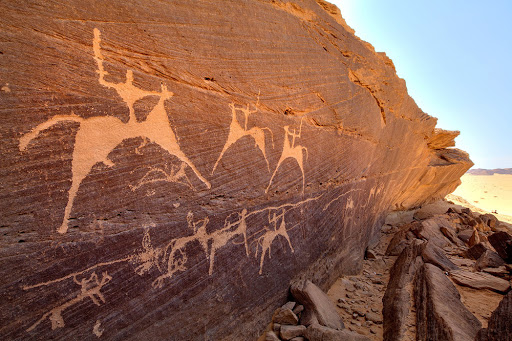 Fig 2
The archaeological findings from Saudi Arabia are very little known, because not much research work has been done on the archaeology of Saudi Arabia. Fig 1 above shows Bir Hima in the Najran desert region in the Southers part of Saudi Arabia. In Najean, there is an ancient well called Bir Hima. Near the well is a hillock. On the surface of this hillock these paintings were made datable to 2nd century BCE. This is quite late as compared to the other rock paintings of the world.
Najran was the desert through which ancient trade routes used to pass. Trading networks began from India, from where the ships used to sail to today's Yemen. They used to cross over the Yemen peninsula by the land and used to arrive along the western coast of Saudi Arabia. They used to travel in a caravan through the Najran and stop by this well of Bir Hima. It was a natural well and in the desert environment, any body of water is very important. The traders used to stop by this well and collect water for themselves and for their animals. Thus, Bir Hima gradually developed into a settlement, as it was an important halting post for the traders. From here, they used to travel northwards across the desert to Syria. This was one of the trading routes from India to Syria.
In Fig 1, in the upper row there are horse riders carrying swords in their hands. In the lower row there are hunters on horses and dogs carrying swords and there are two deer.
Bit Hima was a trading stop for the traders and it was a settlement. But it seems that the settlers in Bir Hima also engaged in hunting.
Bir Hima seems to have been settled by people who had domesticated horses and dogs, had learnt to make weapons and engage in group hunting besides engaging in local commerce with the traders who halted there.
These traits are spread across the world as shown in paintings that are separated by thousands of kilometres and hundreds of years.
Fig 2 shows another face of the hillock beside the well of Bir Hima. It shows a row of ostriches, camels, antlers, some other animals and their bones and a human figure holding a trident like weapon in his raised hand, while another human figure is dancing. This seems like a combined scene of hunting and hunted animals brought and their meat is being cooked while people are dancing. Here again we see a social bonding in the society.  It seems that they were keeping the ostriches as domesticated birds and used to herd them.
Read more about arts and cultures here
Read global news here
Read Technology Today digital magazine here
Art Culture featured Pre-Islamic Arabia