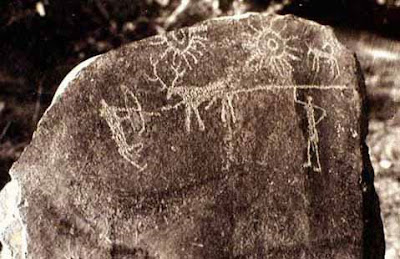 Burzahom is an old pre-historic site located in Kashmir. In earlier excavations Burzahom has thrown up some burials with skeletal remains. It has also thrown up some structures and some pottery. These excavations have been very long known and they have been studied. But these rock paintings are recent findings. The scholars are of the opinion that this entire area of Burzahom was inhabited even in 4600 BCE.

There are several rock shelters here, where paintings re found.

One painting shows an antler who is flanked by an archer with a bow and arrow and another hunter with a spear aiming at the antler. There is a dog at the back of the antler.

This shows that the pre-historic societies used to live in groups and used to hunt in groups. They had tamed the dog to help them in hunting.

On the top of this hunting scene there are two suns depicted. There has been a lot of debate about why these two suns are there. According to one opinion this depicts the burst of a star in the sky.

However, these two suns can be explained differently. If you look at the photograph of the paintings, you can see that there are two panels. On the right side the man is throwing the spear and the dog is pursuing the antler. On the left side, the archer is shooting an arrow at the antler. The sun continues to shine in the sky.

Hence, the sun shows the progressive of this visual narrative.

This shows that the pre-historic people of Burzahom had not only domesticate the dog and trained it to help them in hunting, not only had they developed the social skills of group hunting and had made weapons for hunting, but they had also developed the advanced skills of painting which could depict an organised schema of visual narrative.

We can apply this methodology to study other rock paintings as well.