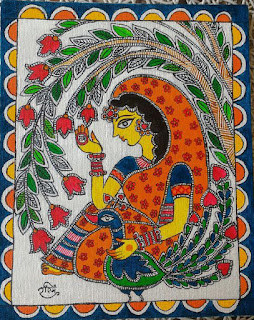 Sita was the princess of Mithila (ancient kingdom in the Eastern India) and married to the Hindu god Rama - the ancient Hindu epic Ramayana is arguably the most influential ancient epic in India, which has generated innumerable forms of visual and performing arts genres across South Asia and also in South East Asia. She is worshipped as goddess, especially in the cultural region of Mithila in the Eastern India. Modern Western scholars and the Indian scholars influenced by them have portrayed her as a "weak woman" who is worshipped only because she is married to Rama. Because of the extreme sufferings she went through in the epic, these modern scholars feel a need to "rescue her" as a suffering woman.
Further, the right wing Hindutva nationalists who control the government in India today have also marginalised her because they invoke Rama as their guiding force and borrowing their extreme masculinist nationalist principles from the Victorian Age Europe (without realising it), which was predominantly masculine in its power structure, they tend to marginalise the feminine forces which are inter-woven into the fabric of Indian tradition - so much so that the Victorian age European scholars actually perceived Hinduism as a "feminine religion." Hence, by both the modernist scholars who think of themselves as liberal Left and by the right wing politicians and academicians, Sita has been marginalised in academic-political-social discourses.
However, she remains a major deity in the Mithila region, which was her native place. So much so that Rama is treated as a son-in-law of Mithila who did not take good care of his wife Sita - the daughter of Mithila - and he does not have as much currency in Mithila as in the rest of India. Ramayana exists in every language of India - except in Maithili, the language of Mithila. Maithili Ramayana has been written from the perspective of Sita as the central figure, not Rama. People of Mithila have not forgotten the sufferings of Sita after she got married to Rama.
If we look at the ancient narrative of the Sanskrit epic however, Sita is not so much of a weak woman as she is made out to be in the post-Colonial discourses on Ramayana. She is powerful enough to lift the bow of Shiva, which was the cause of her father calling for a contest of princes and kings to lift the bow - a pre-condition for the eligibility of a royal suitor to get married to her. Ravana, the king of Lanka who becomes very prominent in the narrative later, could not even shake the bow, thus proving that he was weaker than Sita. When Rama decides to go to the forest following her step mother's orders, he wants Sita to stay back in the palace. However, she absolutely refuses to follow his instructions and places her foot down that she would go with her husband to forest and face all the dangers. Again, when the golden deer comes to their cottage in the forest and Rama hesitates to follow it, because he feels there is some trick in it, Sita absolutely commands him to go after the deer. When they hear a scream in Rama's voice and his brother Lakshmana doesn't want to follow his brother into the forest leaving Sita behind alone, she again takes the decision in her hand and commands Lakshmana to go into the forest. When she is kept in the grove of Ravana and Hanuman comes to see her, he offers to carry her back to Rama if she sat on his back. But Sita insists upon staying there and wants Rama to come and fight the war with Ravana. When they go back to their kingdom in Ayodhya and Rama sends her into forest again because he doesn't want to hear the criticism of the people, he is not allowed to perform rituals without the presence of Sita - presence of Sita is mandatory for him to perform the rituals. When Rama refuses to take her back, she descends into the earth as a protest against the injustices caused by Rama.
At no point does Sita act like a coy, obedient wife that she is made out to be. At every crucial point of the narrative, she questions Rama's instructions, is self-willed and acts upon her own wishes, even forcing Rama and Lakshmana to act according to her wishes.
It has been asked by many readers of the ancient epic as to why did Sita allow Ravana to kidnap her if she was stronger than him, as had been proved before her marriage? Why didn't she fight him and defeat him as other goddesses do in Hinduism?
It has been traditionally responded to this query that the purpose of this narrative is to show the battle between Rama and Ravana which ends in Ravana's death. Hence, Sita acts as an agent to take the narrative forward and not to end the narrative by defeating Ravana herself.
Read more about arts and cultures here
Read global news here
Read Technology Today digital magazine here
Art Culture featured Goddess Figures Mithila Painting South Asian Art