Arts and Cultures - Religion and Erotics in Pre-Modern India 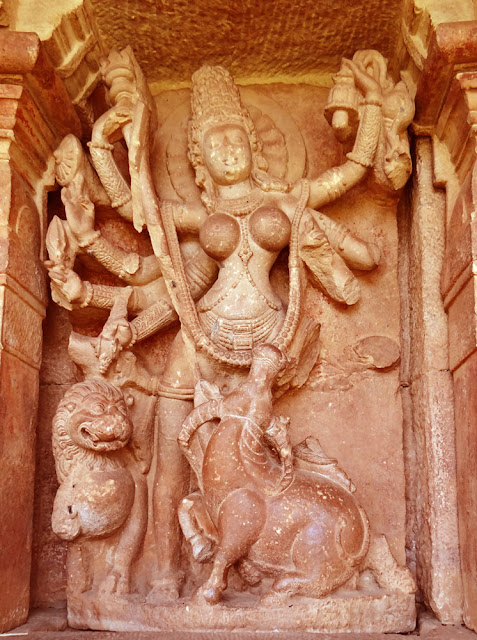 It is a common perception of the Indians and of the outsiders that Indian society is very traditional and explicit references and expressions of erotic imageries in words or visual form are against the norm of “Indian tradition.” Seeing the majority of places in India today, it in fact seems to be true. Indian society is not a touching society ie, couples don’t touch each other in public and revealing clothes are still frowned upon in most places. More serious are the orthodox, politicised reaction of the Hindutva forces against any explicit expressions of eroticism in art forms. Their violent opposition to the paintings of MF Hussain and Shivaji Panikkar are well-known by now. The truth however is, that the pre-modern India had no hangups about explicit representations of erotics in art and literature in public spaces. Too often the mention has been made of Khajuraho in this context. But this culture of accepting explicit eroticism as “normal” goes back to the Harappa civilisation ie, the earliest phase of Indian history. We have numerous figurines from this civilisation, including the famous and much-published “dancing girl,” which are sculpted in the nude. In the early historical period and later, we also have the cult images of Lajja Gauri (also called Aditi, Renuka and Adya Shakti), which shows a headless nude goddess in birth-giving posture with a blooming lotus on her neck. This is thought to be a form of the Goddess related to the fertility cult. Then we have the famous and beautiful Sanchi and Barhut Yakshis and the numerous nude women sculpted on temple walls and painted in Rajput miniatures. A very popular representation was that of a woman drying herself after bath in complete nude state and a figure of a prince secretly watching the scene from a hidden spot in the panel. And let’s not forget the Kamasutra.

The Krishna cult especially lends itself to the culture of expressive eroticism. numerous poetic texts were composed and painted, describing the love-play between Radha and Krishna, which was also symbolic of the union betwen the devotee and the deity. This was perhaps most beautifully and sensitively expressed in Gita Govinda – a 12th century poetic text composed by the Oriya poet Jaidev in beautiful lyrical Sanskrit. In its 24 eight-stanza poems called Ashtapadi, this text beautifully and explicitly captures the love-making of Radha and Krishna. This text has also been the backbone of the exquisite classical dance form of Orissa called Odissi – also describd as lyrical sculpture in movement because of the poses it uses from temple iconography. The poetry from Gita Govinda that is sung with this dance expressively talks about the amorous exploits of Radha and Krishna and the dancer enacts these on stage through beautiful, stylised dance poses, gestures and emotional expressions. If one can understand what is being sung with the dance, the emotional enjoyment of this dance form by the viewer reaches its zenith.

In fact, the entire pre-modern tradition laid a lot of stress on developing the Sringara Rasa in poetry, fine arts and classical dance and theatre forms of India and anyone familiar with these forms of cultural expressions is so well-aware with the explicit eroticism in these forms that often one doesn’t even notice the “explicitness” of eroticism there because one gets so used to it – and it was considered to be normal in pre-modern times, no one really objecting to it. I didn’t realise this myself, so used to I have been of continuously seeing these explicitly expressive images that this normal acceptance of these images in pre-modern India has come to the West only after radical intellectual movements there. This dawned upon me one day when I was teaching about the Goddess cult in class including some students fom Europe and North America, when one student exclaimed at the image above I showed them – “but she is almost naked”! I had seen the photograph of this beautiful 8th century sculpture from Aihole in Karnataka hundreds of times, never once thinking she was “almost naked”!

I looked back at the slide show on the screen and said in a natural voice – “Yes, so what?” I didn’t realise this was any unusual aspect to be pointed out – I took it as normal – and I saw the look of bewilderment on these students’ faces. Then suddenly it occurred to me – these students, coming from a culture that has traditionally liked to show a woman almost completely covered, were not familiar with the idea that a pre-modern image could have shown a woman’s body not really covered – this was a feature of modernity for them, a sign of women’s liberation and for us, it was traditional normalcy, nothing special! And this image is not even as explicit as many other images from pre-modern India. Then I decided to give them a lecture on this theme, how erotic and explicit cultural expression had been a common feature in India, till the colonial norms changed everything. And they really liked this lecture – even wrote and discussed about it in their assignments.

What is of importance here is that these expressions were not only accepted in pre-modern India, they were part of the devotional religiosity of this country. And no one raised an eyebrow over them. We wouldn’t have had such a rich cultural tradition if people had gone around destroying all such expressions, beautifully and emotionally composed, painted, sculpted and enacted.