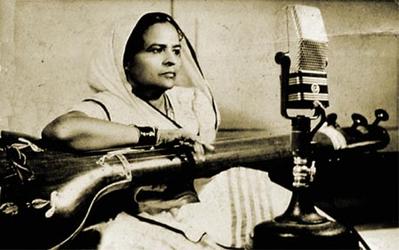 You'll appreciate this video best if you used a headphone, as the sound is low. This is a historical interview in more ways than one and I may write some future posts related to this. The interviewer Naina Devi was herself a semi-classical singer and for sometime she learnt from Rasoolan Bai, a famous courtesan from Varanasi, born in 1902. Courtesans in India were of different categories, from very wealthy and patronised by the aristocrats,to the low-class ones, patronised by the middle-ranged traders and royal officials of somewhat high rank. Further, there were courtesans who only sang and there were those who only danced. Then there were those who were expert singers as well as dancers. Singing courtesans were often accompanied by one or two dancing courtesans and sometimes they only sang; there was no dance recitals with their singing. Rasoolan Bai was a singing courtesan. In this video, she gives the names of her maternal grandmother Adalat Bibi and her mother Bashiran Bibi, who were also singing courtesans. She talks about her elder sister Bhaturan Bibi, who was also a singing courtesan. She also mentions her primary teacher in music, Ustad Shomu Khan, who was a disciple of Shori Miyan, who had migrated to Punjab and had begun to compose poetry in Punjabi. He was a disciple of the school of Mushtaq Ali Khan, the famous Sitar player. She also mentions the names of several other singer-courtesans of her times from the early decades of 20th century and some music maestros. She says that in her times during festivals courtesans and their patrons used to go for boat riding in the night on the River Ganga with decorations and lights and the courtesans used to sing throughout the night and their patrons used to enjoy their songs.
All this stopped when the British proclaimed the courtesans (along with Devadasis i.e., the temple dancers) as "immoral women" because of whom the Indian culture was becoming decadent. They banned the culture of courtesans (and Devadasis) and ordered them to move out of their quarters. The Western educated Indians supported the British in this anti-campaign and by the end of 1920s, the courtesan culture was officially finished in India. It so happened that Indian cinema got sound in 1931 and many courtesans with their entire performing retinues moved to work in cinema, first in Lahore and Calcutta and later in Bombay. However, there were many who couldn't find a place in the film industry. They self-fulfilled the allegations of the British and began to engage in flesh-trade in the military barracks and in the red light areas. Many perished in poverty because they no longer had patrons to maintain them and to appreciate their arts. It seems that many kept on engaging in performing arts and in their courtesans' professions secretly, disguised as "married to their clients" to hoodwink the British. Rasoolan Bai happened to be one of these courtesans. She found a somewhat rich Banarasi silk sari trader as her client, publicly seen as her "husband" and kept on singing in her quarters. She also got a chance to sing on the All India Radio off and on. However, after her client died, she was left to fend for herself. By this time she had grown old and there was no patron for her, nor did she go to the film industry. Some accounts say that she was forced to sell tea on the roadside during the last days of her life, next to the Radio Station where she had sung many times. In this video, she explains the nuanced differences between various types of courtesans' songs and shows the different ways of voice modulation while singing these songs. Quite interestingly, in the end she sings a song that was later immortalised by Lata Mangeshkar in the iconic courtesan film Pakeezah, picturised on the legendary Meena Kumari. While it is Lata Mangeshkar's version that has become immortal, this video shows how it was sung by the courtesans. There are many such songs by courtesans that were sung by Lata in films, but it seemed as if they were popular long before the films for which Lata sang them. I speculate that it seems that these were songs from the courtesans' quarters, improvised by the Music Director for the film and sung by Lata. This video ends with one more such a song -
Read more about arts and cultures here
Read Technology Today digital magazine here
Read global news here
Art Culture Dr Archana Verma featured Hindi film songs History of cinema Indian classical music Lata Mangeshkar South Asian Art