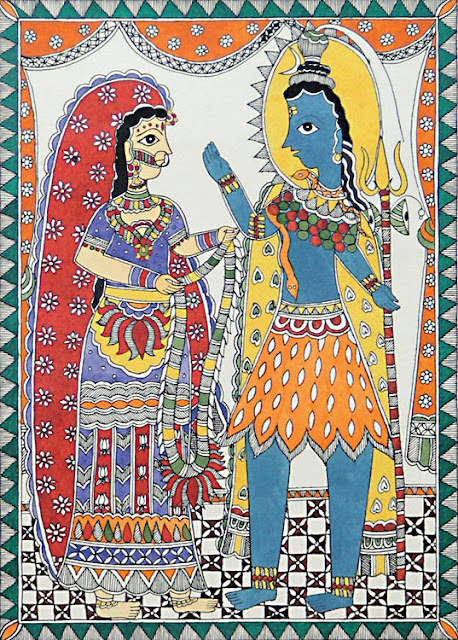 Shiva one of the greatest Hindu deities has multiple images, often conflicting with each other – he is the ultimate ascetic, begging for food, having no proper place to live, smearing his body with ashes from the cremation ground, having cobras crawling over his body and engaging in meditation most of the time. He is also the destroyer of the universe before it is re-created by Brahma in the Hindu cosmology that follows a cyclic notion of time. He destroys Kama the god of eroticism. At the same time, he is the ultimate householder, loving his wife Parvati, sharing his half body with her, benevolent to his devotees and granting them all the materialistic happiness. Shiva means “auspicious”, hence, Shiva brings auspiciousness to his devotees. Parvati is his second wife – his first wife Sati ignored his advice and went to her father’s sacrificial ceremony, where her father didn’t extend her a respectful welcome because he didn’t like Shiva’s ways. Seeing this, Sati was enraged and threw herself into the sacrificial fire. Shiva sent his violent manifestation Virabhadra to destroy the sacrifice and went around the earth carrying Sati’s body. Decaying parts of her body fell in various places and these centres grew as important centres for Goddess worship. It is said that Sati was reborn as Parvati, the daughter of the king of the Himalayas and did severe penance to get Shiva as her husband – this time she became the benign wife of Shiva and an embodiment of marital happiness.

Because of the contrasting images of Shiva and Parvati – one an ascetic beggar, smeared with ashes and cobras crawling over him and the other a gentle and beautiful princess, their marriage has evoked strong emotions in Hindu mythology and other cultural forms in India. The Sanskrit literature talks about Parvati receiving the boon after her penance that Shiva would get married to her. She came back to her palace and announced this to her parents. When Shiva came in the marriage procession, people were frightened to see his appearance. His marriage procession was also not a usual one – consisting of all the gods and spirits, ghosts and semi-divine and fearsome attendants of Shiva. On Vishnu’s advice, Shiva changed his appearance and looked like a handsome young prince, adorned with ornaments instead of snakes and wearing silken garments instead of tiger-skin. His attendants also acquired a pleasant appearance and thus Shiva married Parvati.

This theme has given rise to various forms of folklore in India. In Mithila region in Eastern India, there are numerous folk songs in Maithili, sung at the time of a woman’s marriage, which describe the fearful marriage procession of Shiva and his appearance. Unlike the Sanskrit text, which makes Vishnu’s advice an important element in changing Shiva’s appearance, Maithili songs stress the pathos and sadness felt by Parvati’s mother Mena – called Manain in Maithili songs – who refuses to welcome this groom and rather wants to keep her daughter unmarried. She doesn’t want the marriage ceremony to go forward and in some songs, she even expresses her anger at such a bad groom – aged, beggar and fearful – brought for her young and beautiful daughter. She says in one song that she will drive this marriage party away, will snatch the drum and the rosary beads-garlands of Shiva and will not allow him to enter into her house and if this marriage happens she will not live in this house. Unlike the Sanskrit text, which resolves the issue right in the beginning by bringing Vishnu into picture, Maithili songs are quite frank about a mother’s love for her daughter and the unhappiness and anger she felt on seeing such a mismatched groom for her daughter, for whom she could have got a handsome husband. These songs also show the extent to which women hold power in the ritual space in Eastern India, where they can even stall a marriage ceremony in the last moment if they don’t like the groom for their daughter.

These songs were composed by the great Maithili poet Vidyapati, who is believed to have lived sometime around 14th-15th century and composed a lot of songs in honour of different deities, largest number being in honour of the powerful Goddess, the patron deity of Mithila. The power of a woman’s voice is expressed very clearly in these songs. Finally, Vidyapati resolves this conflict in the story by suggesting to Mena that this Shiva who looks like an ascetic beggar is in fact the lord of the three worlds and the cause of auspicious life of all beings. Therefore, she should give her daughter in marriage to him since there is no one greater than him. He also says that it was ordained by the writer of Destiny that Parvati should get this ascetic husband and hence, writing of destiny can not be erased. It is remarkable that the more famous lines from the Ramacharitamanas of Tulasidas, which also talk about the hand of destiny in this marriage, were in fact composed about two centuries later than Vidyapati’s songs. Tulasidas lived in 16th century CE. In this manner, it is ultimately the revelation of Shiva’s identity as a great god and the destiny’s decision to marry Parvati to this great god that paves the way for Parvati’s marriage to Shiva.

Parvati is the patron deity of marital bliss and the marriage ceremony in Mithila involves worship rituals to her, so that the couple continue to live together in a happy manner. Moreover, Shiva and Parvati are always cited as examples of an ideal couple in Maithili folklore, never Rama and Sita, because Shiva keeps Parvati on half of his body, while Sita the princess of Mithila never lived comfortably after getting married to Rama. However, the folk songs of Mithila always describe Rama as a handsome groom, seeing whom Sita’s mother became happy, while Parvati’s mother didn’t want to get her daughter married to Shiva and agreed only after he was described to her as a powerful god. Somehow, the paintings of Rama and Sita’s marriage are also much more numerous than the paintings of Shiva and Parvati’s marriage in the now fabled Mithila painting tradition.

Mithila’s folklore thus, assert the emotions of a bride’s mother and the women in general in many ways. They show the aspirations that a mother has for her daughter’s marriage and the forceful ways in which she can express them. At the same time, there is a strong notion in the popular psyche about how a husband should treat his wife and moreover, what kind of a groom the women desire to come to their house. The popularity of one Hindu divine couple over the other in song and painting is guided by this choice.