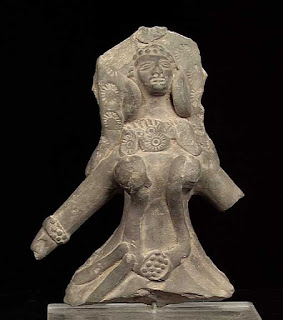 This is a very interesting figure from Indus Valley, especially in relation to the famous seal found from Mohen Jodaro, which has been published, showing a man seated in meditating posture and surrounded by animals. Many scholars have interpreted it as the prototype of meditating Siva in his Pasupati form. This figurine shown above is a women shown in  similar meditating form. She may be interpreted as a precursor of the Goddess in the form of meditating Parvati. Today, the Goddess is visualised in many forms. She is a great warrior who can't be defeated in war. She is also a benign wife of Siva who grants prosperity to the household. She is also visualised as a meditating Goddess.

She has been carved elaborately. She wears matted locks on her head tied with a string of beads. She wears an elaborate headdress on which some floral designs are carved. She wears huge rings in her ears. Her face is very well carved with clear eyes, nose and lips. She is wearing elaborate necklaces around her neck. One of the necklaces has floral designs which match the headdress designs. There are different types of floral designs. There are small flowers and big flowers. On her left is a fstener for the necklace. There is another long necklace which extends to her abdomen. There are clear depictions of garments hanging from her waist. She is shown as wearing clothes. She is also wearing bands on her arms which again have beads carved on them. She also has a flat base, sho she coluld be placed on a pedestal for worship.

This figurine is very close to the meditating Goddess as she is conceptualised in today's times. Meditating Goddess is a very integral aspect of the idea of Goddess in Hinduism. These specimens show how the concept of Goddess was visualised by the terracotta artists. The idea of Goddess might have existed long before these figurines were made. But the terracotta artisans gradually evolved the technology of carving the Goddess in an advanced form. This shows the technology of terracotta carving in the Indus Valley.