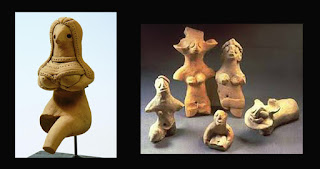 This is a continuation from the previous post. The figure on the left is a woman figurine from Mehrgarh - 3000 BCE - 2800 BCE. It shows an advanced technique of terracotta modelling. This figure is not standing, but sitting. This shows that by this time the artist had developed the technique of a seated figure. This kind of modelling requires an understanding of the weight of the figure so that it can remain stable.In this figure, although the eyes are just holes and the nose is just a beak like shape, the headdress is very elaborate. Attempt has been made to show the decoration on the headdress and on the jewellery around the neck. The way this figure has been carved with rounded shapes, the scholars fee that it is related to the fertility goddess. However, we don't have any conclusive proof of this, although it is probable.

The photo on the left shows terracotta figurines from the mature phase of Indus Valley, when large urban centres such as Harappa, Mohenjodaro, Kalibangaa nd Lothal had emerged, the social organisations had become complex and economic activities had taken varied forms.

From the mature phase, we find a multitude of more advanced terracotta figurines from across the Indus Valley Civilisation, which includes Haryana and Gujarat. These show headdresses of varied types and eyes are not just holes but effort has been to show the eyes. Headdresses are not only elaborate but there is a diversity in their carvings and decoration. Ear rings appear and figurines could be made in different postures.

All these figurines had a flat base so they could be placed on a pedestal or altar for ritual ceremonies.