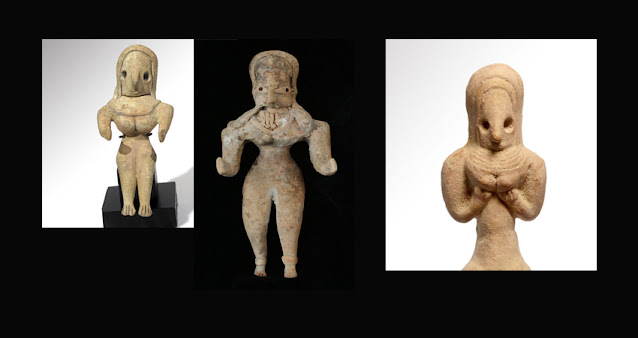 Indus Valley was one of the most ancient civilisations in the world. It had trade relations with West Asia and Egypt. It had 3 phases of early, mature and late civilisation sites spread across today's Pakistan and Haryana, Gujarat and Western UP in India. Rakhi Garhi, Rehman Dehri and Mehrgarh were early Indus Valley sites towards the Western part of Pakistan in what is now Baluchistan. Mohenjodaro and Harappa were the largest sites in Pakistan, while later Kalibangan in Haryana and Dholavira and Lothal port in Gujarat were discovered and it was realised that the actual extent of the Indus Valley civilisation extended beyond the Indus valley and spread across a very large area in the North Western part of the South Asian subcontinent. Chanhudaro, Balakot, Kot Diji and Sutkagandor are among the later phase of Indus Valley civilisation. Its heritage is a shared heritage of South Asia. Along the trade route between Indus Valley and ancient Smeria and Mesopotamia in West Asia and Egypt in Africa, a lot of cultural ideas were also transmitted to and from these civilisations.
It has thrown up many terracotta female figurines which have been regarded as the goddess figures of Indus Valley.
The figure on the extreme left in the above photo shows a terracotta figurine found from Mehrgarh. It shows the early stage of terracotta figurine making skill in Indus Valley. The way of making a woman figure is very simple. Lumps of clay are taken and moulded into a very simple stylistic figure. It's not a realistic figure, since all the features of human figure are not carved, as they didn't have that type of technology at that time. Jewellery is shown by attaching a broad plate around the neck with fine lines carved on the plate. It shows the woman wearing multi-stringed necklaces. The technique of carving the garments was perhaps not evolved then, so garments are not discernible. Feet are shown by just carving some fine lines. Face shows just a thin line to show the ips and a peak like shape to show the nose, two holes to show the eyes. The hair is shown by a plate that covers the head.
Some scholars have given the interpretation that this is the figure of a malefic goddess. Even today there are some beliefs about some goddesses bringing misery and sufferings while others bring prosperity, children and happiness.
However, it cannot be attested that this is a malefic goddess figurine. This seems more like the case that in this early phase, the people didn't have the technology to mould the face properly and hence, they used very simple methods to show a simple stylistic face. In fact, we don't even know if this is a goddess. Because there is no other corroborating record to prove it. However, a lot of these figurines have been found across Baluchistan. Hence, these figurines are regarded by scholars as goddess images. That could be true because even today in different parts of South Asia, terracotta figurines are kept in the house and they are worshipped for the prosperity, protection and for the well being of the family. So, it could be true that these were goddess figurines kept in the houses for worship. But whether these were malefic or benefic goddesses can't be attested.
The figurine on the extreme right is another terracotta figurine from Mehrgarh in Baluchistan. Again, face has been shown by a simple style as in the first figure. But in this figurine, the hair assumes a more elaborate shape. There are multiple bands around the head to show an elaborate hairdress. This figure shows folded hands and the jewellery plate around the necks show multiple lines of strings. This figure suggests that it might have been used either as a display or as a ritual object. The west is slim and it broadens into a flat base. Hence, it could be kept on a pedestal. Because of this, scholars have interpreted that this might have been a ritualistic figure. This figure shows an advancement over the first figure and because it could be placed on a pedestal or an altar, there is a possibility that these people might be worshipping these figures.
The 3rd figure in the centre is also from Mehrgarh. This figure shows a more elaborate headdress over a bun. The bands of clay have been moulded more elaborately here. In the centre, there is some kind of jewellery mark also present. Eyes have become more evolved. They are no longer just holes in the face. There is an attempt to show the eyeballs and the shape of the eyes. Nose has also been carved more elaborately. Hair braids also fall on both shoulders in the front. Jewellery around neck is also no longer a plate with string marks, but attempt has bee made to differentiate different types of jewellery and intricate design. This is a full figure and the woman is wearing anklets around her ankles. The advancement of figurine carving seems to have evolved because of two reasons - the technology of figurine carving had evolved and also, the society had evolved to make more elaborate jewellery and other lifestyles.
Again, we don't know if this is a Mother Goddess, but this figure is also standing and can be kept on a pedestal. Some of these figurines are shown with back smoke marks on them. Because of this, scholars think that some kind of incence was burnt in front of them during prayer rituals. This seems to be a viable interpretation.
Read more about arts and cultures here
Read global news here
Read Technology Today digital magazine here
Art Culture Dr Archana Verma featured Goddess Figures Indus Valley Civiisation