Arts and Cultures - Goddesses from Mohen Jodaro and Harappa 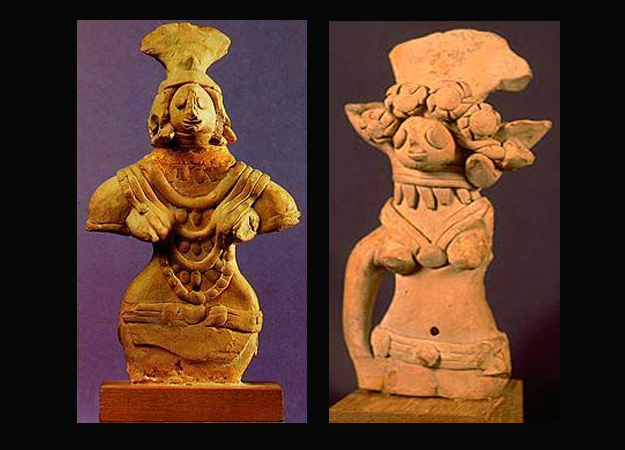 Two great urban centres of Indus Valley, Mohen Jodaro and Harappa, thrown up two very enchanting figurines which have been regarded by the scholars as goddess figures. The figure on the left in the photo above is a very famous figurine from Mohen Jodaro, which shows very elaborate and and advanced terracotta modelling. It wears a very elaborate headdress, which is not just hairdo, but looks like some kind of ornament on the head, like the aristocratic families wear. This woman seems to represent the affluent class of Mohen Jodaro. If she represents a goddess, then she is not just a divine woman but a very affluent figure. This is similar to today's depiction of goddesses, who wear fine garments and elaborate ornaments. Her ear rings and hair are seen separate from the head ornament. Her hair show curls. Her jewellery is also elaborately carved and her necklaces hang right upto her abdomen. Her necklaces show pearls or beads. Her ornaments might have been made with metal, gold, bone or terracotta. There are strings of different shapes and sizes around her. Her waist band is also elaborately carved and shows some gem stones studded in it. There is also some attempt to carve garments on her.

This figure shows that the conceptualisation of a goddess had evolved by the time of the mature phase of the Indus Valley and also, the carving techniques of terracotta artists had evolved.

Her face is also carved more elaborately. Her eyes are not just holes. Lips are also modelled in a more realistic manner. She too wears elaborately carved necklaces of different types and sizes. Her waist band is also elaborately carved and shows gems studded in it.

She also has a flat base, so this figure could be placed ona pedestal for prayers or for display. It's possible that this figurine could be worshipped in the family altar in the home.