Arts and Cultures - God Viracocha and Flood Legend from the Incas 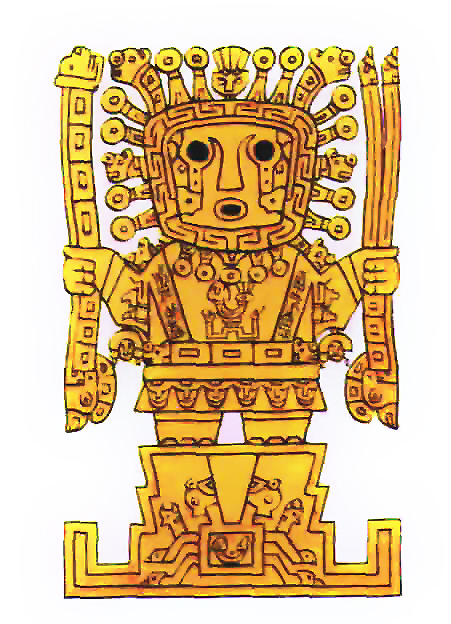 Ancient Andean cultures believed in a cosmic God who controlled Sun, Moon, Thunder, Rain and the Creation. In the Inca culture he was known as Viracocha. He is depicted as wearing a crown of sun, holding thunder in both hands as his sceptre and tears raining from his eyes. Snakes are often depicted on his person. He is also known as Kon Tiki Viracocha.

The oldest known depiction of this God was carbon dated to 2250 BCE carved on some terracotta shards in a burial site in the North Chico region. Scholars are of the opinion that his worship had spread to the central Andean region by 600-1000 CE.

The attempt to forcibly convert the Incas to Christianity began by replacing Viracocha with God in Spanish accounts.

The Inca legend narrated the event of a Great Flood that God Viracocha caused around the Lake Titicaca along the border of Bolivia and Peru, saving only a couple to restore civilisation to the rest of the world. He first created giants, but they were violent. Hence, Viracocha destroyed them in a flood and created human beings. In some versions, the destroyed race was that of Tiahuanaco Native Americans from the pre-Inca period.