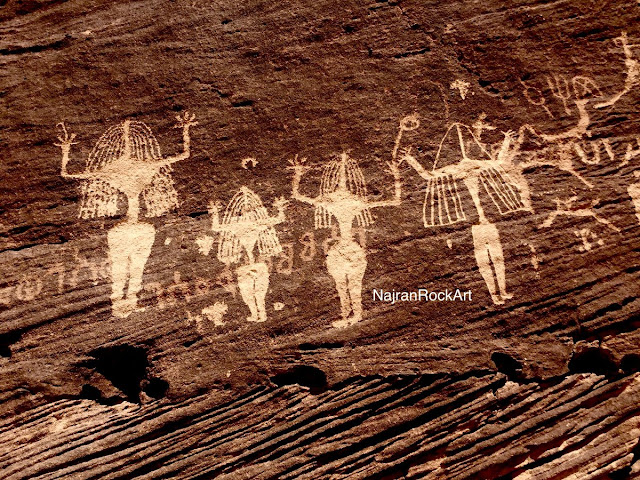 This is an interesting rock paintings from the  hillock near the ancient well of Bir Hima in the Najran desert of Saudi Arabia. In this, there is a row of women who seem to be dancing holding each others' hands. They have long hair and they are standing in similar pose in a row. They also seem to be wearing some kind of anklets. These might have been made of terracotta, or bones. We can't make out. There are some small animal figures jumping around them.

It seems that the pre-historic society of Bir Hima was a well organised society. They had domesticated animals and large birds, they had developed the skill of group hunting and of making weapons and their women also had their own dancing gatherings.

Behind the dancing women there is a script on the wall. This script is datable by the scholars to 5th Century BCE to 2nd Century BCE. This script is very different from the Arabic which is used today. It seems to be related to Hebrew and other Mediterranean scripts.

This painting shows that the women used to participate in public ceremonies.

These rock paintings from different parts of the world show the organised lives of the pre-historic societies. Further, from their painting technique we understand that they had learnt the skill of making dyes. These dyes might have been vegetable dyes or chemical dyes obtained from rocks and mixed in water. Thus, they had this kind of understanding of making dyes and some kind of brush with a thin twig or reed.

These figures also show that they have been modelled quite well. There's a stylistic understanding of how dancing women should be painted. There seems to be an understanding of how different figures of women, hunting men, dancing men, animals and birds etc can be made and how with a single dye the entire painted panel can be prepared. Different panels also show different colours - in Bir Hima we have red, yellow and white colours. White could be obtained from limestone, red from ochre and turmeric could be obtained from a rock. Or, if it was obtained from turmeric, then it shows that they could obtain turmeric from India, since this was a halting point of traders coming from India.