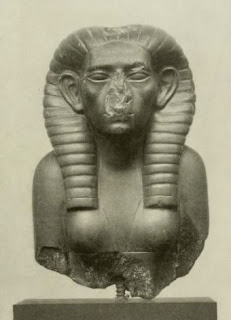 The legends of the Great Flood exist in many ancient cultures, although the one found in the Old Testament of the Bible has become the most widely known. Amongst the older legends of Flood, one existed in the ancient Egypt.

Nile the lifeline of Egypt, rises annually because of the monsoon and its waters inundate the surrounding areas. The annual flooding of the Nile is so consistent that the ancient Egyptians set their agrarian calendar to it and their agrarian cycle was linked to it. The floods can reach upto 45 feet at Aswan, 38 feet at Thebes and 25 feet at Cairo. During the floods, the silt from the upper Nile flows into the lower Nile, causing the waters to turn red. It appears that the Egyptian legend of the Flood evolved around this annual phenomenon.

Sobekneferu was the 1st woman pharaoh of ancient Egypt, who ruled in the 19th century BCE for approximately 4 years.

Interestingly, her name means "Beauty of Sobek." Sobek was a deity in ancient Egypt, who was the patron of fertility and war and protected the Pharaoh against the dangers of the Nile. He was associated with the crocodiles of the Nile that were most abundant during the flooding of the Nile.

Sobekneferu was the only surviving child of the Pharaoh Amenemhat IV. Hence, she ascended the throne after him and ruled in her own right. She built monuments during her reign and struck seals. She died without an heir and the 12th Dynasty of ancient Egypt ended with her. The flooding of the Nile during her reign is recorded.