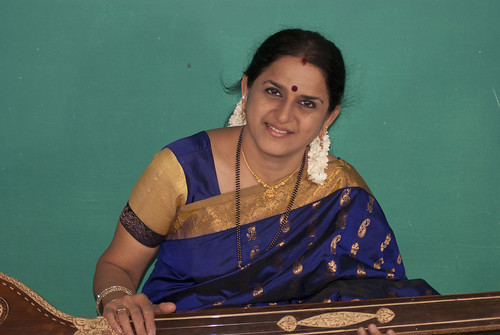 Carnatic Music singer Jyothi Kamath is a household name in Tamil Nadu and is very well known in classical music circles. She has received the title of Gandharva Vidyadhara, has received training from renowned singers in Carnatic music, has albums in all genres - bhajans, classical Ragas, abhangs, folk, thumris and others. She regularly appears on TV and is invited to music programmes in Tamil Nadu. She has performed at prestigious venues in India. In this interaction, Guru Jyothi Kamath talks about her musical journey.

Tell us something about your early life, how you were inspired to go into singing, the influences on your life and the environment at home which may have contributed towards your becoming a singer.

I was exposed to music right from my childhood as my parents were very much interested in music. Singing devotional songs were very much part of the daily routine. My brothers are musicians. My eldest brother is a violinist and elder one is Mridanga player. My aunt Chitra, who is a Veena player, has been a constant inspiration for me. There was lot of encouragement from parents for developing
the skills and I used to participate in lot of competitions held in school and college.

Tell us something about your music teachers. Also, about your experiences of music learning process.

The most influential was Guru R Vedavalli, who is a very popular singer and practices traditional classical music.

The training under her definitely helped me to mould my career. The second Guru I would like to mention is late Sri Tiruvengadu Jayaraman who was instrumental in making me reach the depths of
music. Presently, I am continuing my lessons under the tutelage of Kalaimamani Sikkil Bhaskaran, as music learning is a journey which never ends.

I sing classical Carnatic vocal as well as Abhang and Bhajan singing. The former came due to my interest and training which I received, but the latter got into my system right from childhood because of the atmosphere at home. I want to develop and learn more of classical type music.

Given a chance, would you consider film playback singing?

If there is an opportunity, I would definitely take it up but I would like if it is of semi-classical or classical based music.

Did you have to struggle to establish yourself and what kind of struggles did you go through? Would you say that this is a common experience for all musicians in India and how should they approach it?

Though it is a really competitive world, a person’s perseverance and dedication helps him or her to establish and I very much believe in abundant theory and everyone has some opportunity and place, if
one strives for it.

Can you narrate a few memorable moments in your musical career which you may like to share?

I have been conferred with Gandharva Vidhyadhara and Perumpananangai titles. Recently, I got an opportunity to present a session on Abhangs in the most prestigious Music Academy in Chennai, where I could sing in front of the stalwarts of the music fraternity.

Do you see any change over the years in musical training and musicians who go into classical and semi-classical singing career? What were the old trends that may be disappearing now?

Earlier, it was like the Gurukul system, where the disciples stayed with the Guru. But that has almost disappeared. The training also used to be rigorous and the disciple had to follow certain discipline rules during these training periods. Now, students are looking for short cuts and even before they learn the nuances they are keen on giving stage performances. Earlier, the training periods were also
longer and used to extend for hours together, even the performance used to be for three to four hrs which has been reduced these days in most cases to 2 hrs to 1/2 hrs.

For the aspiring musicians, what suggestions would you give? How should they approach this career? Any words of caution for them?

One important element is commitment for what is being undertaken, then continuity, improving and learning new techniques and attending concerts of leading musicians as listening is very important and one has to be patient.
Carnatic Singer Dr Archana Verma Indian classical music Jyothi Kamath KAAC The global Centre